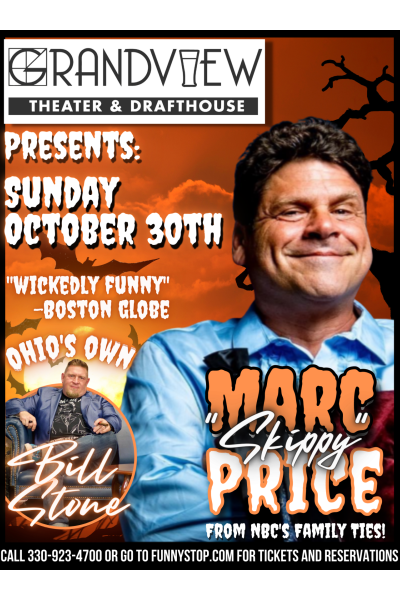 Grandview Theater and Drafthouse welcomes Marc "Skippy" Price from NBC's Family Ties for an evening of hilarious stand-up comedy. Ohio's own Bill Stone will also be performing. Jokes start at 7pm. Tickets only $20.

As a stand up comedian Marc has opened for Jay Leno and Jerry Seinfeld.

As an actor he’s starred in movies such as Trick Or Treat, with Ozzy Osborne and Gene Simmons as well as Killer Tomatoes Eat France.

In the 2000’s he was successful behind the cameras writing and producing for E! TBS, Disney Channel, Animal Planet, GSN, Showtime and more.

While 2020 shut down the live touring business, Marc kept busy hosting his own daily 80s radio show on WROD The Rock of Daytona in Florida.

2022 finds Marc as a commercial spokesperson for The Insurance King, as well as having two new television projects in development and touring more than ever.

Find out why the Los Angeles Times calls him "refreshingly bright" and the Boston Globe says he's "wickedly funny."